Roy put together a radio inspired trivia game for a recent general membership meeting. Try it!

Mike received a A25RU DX Expedition Plaque. He made 3 QSOs for this Botswana Russian DXpedition. 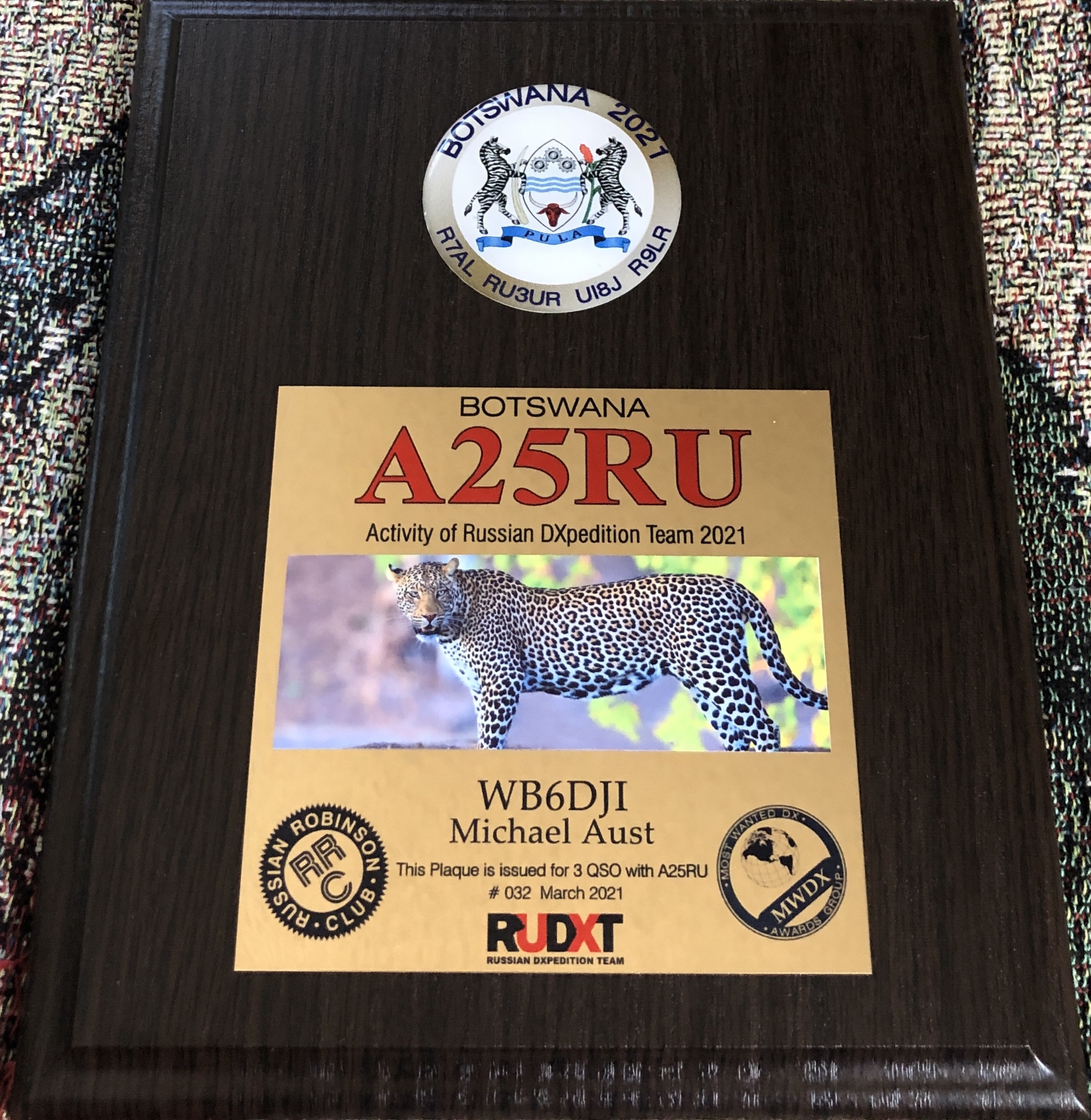 Bruce has been exploring Moab, Utah lately. Here are some of his (fantastic!) pictures.

Here’s the KISS presentation on EZ Up Antennas from our March 10, 2021 meeting.

On January 16, Mike’s book was published and made available on Amazon.com.

The Survivor’s Legacy: How the Holocaust Shaped Future Generations by Sally Lefton Wolfe and Michael Leonard Farkas with Margery Walshaw.

On December 13, Arizona Highways chose one of my photos for their Photo of the Day.

Mist rises during a frosty sunrise along the Mogollon Rim in Central Arizona (https://www.arizonahighways.com/photography/photo-archive).

Advertising and celebrating Hanukkah on the air of amateur radio operators around the world.
All times listed in the document are IST (Israeli standard time (UTC+2))

On the days of Hanukkah this year, special Israeli radio amateur stations will be operated with the call signals ending in letters from the word CHANUKAH, with the number in the reading letter indicating the number of the candle (the serial day of the holiday) in the menorah.

There will be a lot of publicity for the special session on Facebook, on websites and forums of radio armature operators around the world.

Beginning on the evening of Thursday 10 December with the lighting of the first candle (around 17:00), in a sequence of all holidays until midnight on Saturday 19 December 2020 at 23.59 Israel time. A total of 9 days.

It is mandatory to maintain an electronic log (ADIF) which will be sent (uploaded) to the IARC website at the end of the activity (under the responsibility of all group managers).

For the purpose of the special event, a website will be built with a large menorah in the middle and all the special reading signals will be used as holiday candles, and will be lit every evening during the holiday according to the number of the candle in the menorah.

After completion of operation, all connections of the special stations will be streamed to the LoTW website

The director of QSL (QSL paper) is Slava 4Z5MU.

Bill’s father got his first ham radio license 101 years ago this October (2020). He was 6AE originally. He let his license expire and then was licensed as 6DCE. Around the late ‘40s, he had the opportunity to get his old call, or as close as they had available, and he got W6AJ. Shortly afterwards he had the opportunity to get W6AE but he preferred to stick with W6AJ because people would often miss a trailing e. Bill eventually changed his call to W6AJ. Both W6AE and W6AJ were available, but Bill stayed with W6AJ because his father had preferred it.

Hand-Crafted Keys and Paddles by W6BUX

BIARA Associate Gurbux Singh W6BUX, who is an avid CW enthusiast, has a background in Mechanical Engineering and grew up in Rangoon, Burma where his parents had a machine shop and foundry and also had the Amateur Radio station XZ2KN where he got hooked on Morse Code. After immigrating to the USA in 1974, he got back into ham radio and of course CW. After 60 plus years as a CW operator, he has a discerning eye and a feel for what makes a good key or set of paddles for sending good code. Not satisfied with what was available off-the-shelf, he decided to craft his own for his personal use.

He noticed that most manufacturers used springs for returning the contacts to open and that made them have a dead feel that was not smooth. That was true for straight keys and paddles. Instead of springs, he uses repelling magnets to open the contacts and this gives them a very smooth action and almost no lag in opening the contacts when keyed. He likes this return movement technology so much that he has also modified an off-the-shelf Kent key which had springs into one with magnets for opening the contacts. Some of his ham friends who have had a chance to use his products whether at his home or on board the USS IOWA, or on Field Day, are amazed and impressed with how good the “feel” is. Gurbux uses only his home made keys and paddles and has no reason to buy them from other places.

Incidentally, Gurbux uses only basic hand tools and does not have or make the use of fancy machines to make these. It is the enjoyment of making them for his own use, not for selling them, which gives him satisfaction. Making one key can take many weeks or months but who keeps track when one is having fun as another part of his hobby of Ham Radio.